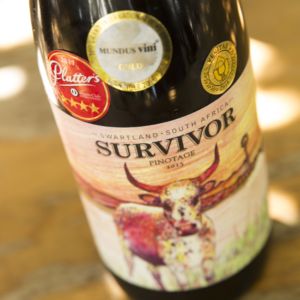 At this year’s Boston Wine Expo, South Africa had a stronger presence than the previous year so I needed to check out some of the new wines that were being showcased. I’ve enjoyed South African wines for many years, from Chenin Blanc to Pinotage, and I continue to find fascinating and delicious wines from this country. For example, the Swartland is a region that recently has been garnering much praise for its innovative new wine makers. And at the Expo, I found a few fascinating wines from Swartland, as well as some other interesting South African wines.

Meridian Prime, an importer of South African wines, was founded in 2011 by Ross Toombs, a native of South Africa. They currently have an portfolio of about 15 producers, from 9 wine regions, with an additional four or five new producers to be launched later this year. At the Expo, I spoke with Sam Timberg, the Managing Director, asking him to show me some of the most intriguing wines they were sampling at the Expo.

The Survivor Wines are produced in the Swartland and has an intriguing origin story. It is said that a truck filled with Nguni cattle, the traditional livestock of the Zulu people, drove by their vineyard. One of the cows leapt from the truck, survived, and escaped into the vineyard. The cow thrived, producing offspring, and the winery decided to call its wines “Survivor,” in homage to that cow. Their website also states: “Because she embodies the free spirit of the Swartland, these wines pay tribute to our noble Nguni cow, SURVIVOR.”

The 2016 Survivor Chenin Blanc ($18.99) is basically a barrel-fermented wine, with 70% of it undergoing barrel-fermentation infers fill, untoasted Sylvain French oak. Then the wine was aged in the barrel for four months before bottling. It was aromatic and delicious, with a nice depth of flavor, including tastes of pear and citrus with some hints of minerality. It has a mild creaminess to its texture, a nice balance, and a pleasing finish. An excellent value for this complexity and quality.

The 2015 Survivor Pinotage ($18-$20) was aged in 95% French and 5% American oak for about 18 months. Pinotage can be a divisive grape but I’ve always been a fan, and this example was impressive. I found it to be smoky and spicy, with deep flavors of plum and black cherry, with hints of vanilla, spice and bacon. The tannins were well integrated, it had a lengthy finish, and would be an excellent accompaniment with lamb, steak, or other roasted meats. Highly recommended.