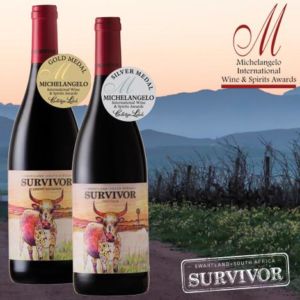 The 2015 Survivor Pinotage, as well as the 2015 Cabernet Sauvignon, now boasts a gold medal from the prestigious international wine competitions, Mundus Vini 2016 Summer Tasting and Michelangelo International Wine and Spirits Awards respectively, a confirmation that this brand is not only commended on home soil, but also in international wine circles!

The Survivor range of wines, with an impressive array of local and international acclaim, was named after a Nguni cow. Survivor accidently found her way to a farm situated in the Swartland area, by jumping truck as she passed by. She miraculously survived her injuries and today these wines pay tribute to this extraordinary cow, as well as the generous spirit and unique terroir of the Swartland, where the grapes are sourced from.

The 2015 Pinotage boasts hearty fruit flavours, a full body and well-integrated oak while the 2015 Cabernet Sauvignon is a robust barrel-fermented wine with lavish flavours of sweet fruit and luscious chocolate mingling with savoury touches and a hint of vanilla.

The 2015 vintage Pinotage, says Gerhard van der Wath, Managing Director at Overhex Wines International, serves as a benchmark for distinctive South African Pinotage. “With international recognition like this, the 2015 vintage shows even more potential than its predecessor which was one of the Top 10 wines at the 2015 Absa Top 10 Pinotage competition. And when you look at the Cabernet, this wine is also outperforming its forerunner.

“This wine portfolio is going from strength to strength and the 2015 Survivor Pinotage and Survivor Cabernet Sauvignon illustrates the uniqueness of South African Pinotage and Cabernet in the international wine world. It also serves as a standard for the brand and all future wines to be created here at Overhex Wines International.” Van der Wath concludes.