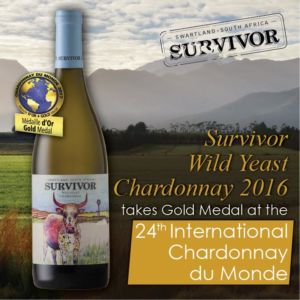 The Survivor Wild Yeast Chardonnay 2016, is one of only 55 wines in this competition to clinch a coveted Gold Medal.

In keeping with the trend noted by organisers of the Chardonnay du Monde – that the Top 10 performing Chardonnays mostly lean towards a style which includes a significant portion of barrel-aging – the Survivor Wild Yeast Chardonnay is the product of natural, 100%-barrel fermented juice in 100% first fill, 500 l, French oak barrels. The wines were then matured in barrel for 11 months before being blended and bottled – a technique which impressed judges in what is widely considered one of the wine world’s fiercest wine competitions.

Held annually, the Chardonnay du Monde competition distinguishes itself from other wine competitions based on its single focus (Chardonnay), its worldwide scope and its rigorous wine judging method – which is “much stricter than the norm” according to its organisers.

This year, awards were based on the expertise of 300 international wine experts who tasted, scrutinised and rated 706 wine samples from 38 countries. The end-result was that only 235 medals were awarded in total – with just 55 Gold Medals awarded to the top-performing Chardonnays.

In total, only 4 Gold Medals and 4 Silver Medals were awarded to wines from South Africa, which, indicative of the Chardonnay du Monde competition’s strict performance criteria, nonetheless is noted as one of this year’s Top Performing countries.

According to Ben Snyman, Head Winemaker at Overhex Wines International, this award is an indication that bravery is always rewarded, “like the story of the brave Nguni cow on its label, we took a chance playing with wild yeast on this wine, and combining it with what many will consider a serious barrel regime. The end-result is that many, fiercely critical international judges thought it worthy of a Gold Medal. We not only survived, we thrived, and it makes me feel very proud of my brave team!”

The Survivor wine portfolio is owned by Overhex Wines International, a Worcester-based winery that is also the custodian of wine brands Balance, Magaliesburg, Willow Way and Harvest Song, amongst others. It tells the story of a brave Nguni cow, who, while being transported from one farm to the next, jumped from the truck to settle for a longer, more privileged life in the Swartland. She now has six offspring and counting!