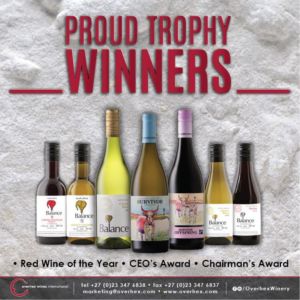 Overhex Wines International is proud to report that our 2015 Survivor Offspring Red Blend was announced Red Wine of the Year at the South African Airways (SAA) Wine of the Year Awards. The winners were announced at a gala dinner held in Cape Town on Saturday, 8 April. In addition to presenting the annual awards, the airline announced the selection of locally produced wines that will be served on its flights and in its Business Class lounges over the next 12 months.

Nine local and three international judges were responsible for this year’s SAA selection, among them Cape Wine Masters and renowned sommeliers.  Each entry was scored after a blind tasting and the results were compiled by both internal and external auditors. This year more than 500 entries were received from winemakers across the country. From these only 24 white and 24 red wines were selected to be served on a month-to-month basis.

Commenting on Overhex’s achievements Managing Director Gerhard van der Wath says his company is delighted to have its wines featured among South Africa’s best. “We source our grapes from choice vineyards in a variety of top regions all over the Cape Winelands.  Bringing the grapes home to our state-of-the-art cellar where a dedicated winemaking team awaits has once again ensured an exciting portfolio of truly great wines.”