Survivor Shows Eye of the Tiger in New Chardonnay 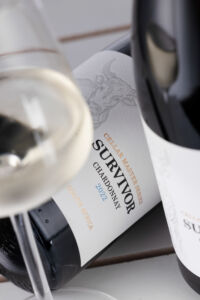 Not wishing to suffer from impalement by wooden barrel stave held by the calloused hands of a hard-working winemaker, I have refrained from alluding to a sense of bitterness that might be found in certain wines. The term can be misconstrued as being negative, especially after those pesky British wine-writers of the 1990s branded South African red wines, especially Pinotage, as being bitter with impolite notes of nail-varnish and burnt under-arm hair.

But as we pursuers of the senses-pleasing drinkables know, bitterness is pleasant and refreshingly bracing when wrapped within the framework of myriad flavours and textures. Tonic water with a slap of gin…a few drops of bitters to a sweet Tequila Sunrise…that crunch of celery with the Bloody Mary. Here a hit of bitter lifts and perks, gives depth and character, and – in wine – a unique kick. As I found here.

Survivor Wines has just released a Chardonnay in its top-tier Cellar Master Series, made by Pierre Wahl who has built-up a reputation as a no-nonsense, solid winemaker especially known for the varietal expressive Chenin Blanc and Pinotage wines he created at Rijk’s in Tulbagh. Having gotten familiar with his deftly structured Chenin Blancs and those bright, yet brooding Pinotage wines of his, I was particularly interested to experience Pierre’s interpretation of Chardonnay, as well as his choice of terroir for the sourcing of the grapes.

For the latter, he went continental climate, namely a 22 year-old block growing in Tradouw in the Klein Karoo, there where night temperatures are known to freeze the eggs of male ostriches and the soils are ancient, hardy Bokkeveld Shale. It is rough country, all layered stone and valleys in between the yonderness or the open veld. Interesting geography known for delivering, among others, Shiraz and Cabernet Franc with a firm expression of the respective varietal nuances.

The wine was also aged in these vessel for seven months before blending and bottling,

Pierre had obviously done his homework, pursuing a multi-pronged approach, as Tradouw Chardonnay does, due to the flavour-retention of the lees, tend to appear as a bit of a one-dimensional wine running a strong line of flavour and palate presence, but has you missing the verve and guile of that something special one seeks in the country’s ubiquitous Chardonnay offering.

It certainly has worked here, as the Survivor Cellar Master can rightfully stake a claim among the finest renditions of Chardonnay for which the Cape is building such a sterling, and noted, reputation.

On the nose the wine smells of gold and wilderness, those noble elements of white flowers and sunny white fruit and crushed nut-shells slightly disrupted by buchu-roots still covered with fresh, old earth. This edginess continues onto the palate, where Chardonnay pedigree holds true in the precise tastes including grilled hazel splashed with sea-water, cold butter hitting a crust of fresh, warm sourdough bread and a most delicious sun-drenched compote of honey and lime. A run of rock salt adds to the thrill.

As well as that slight edge of bitter. Here it is, Sicilian lemon peel, thickly cut and the invigorating tang of a green loquat, this presents itself in the wine. Adding action and brilliance, giving this Chardonnay a uniqueness, a sense of own.

Constantly on the look for variety in Chardonnay, this wine has found my sweet-spot. There’s a new kid in town.