The Story Behind the Cow in the Wine Aisle … 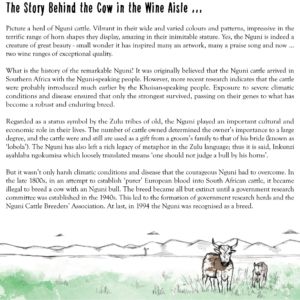 Picture a herd of Nguni cattle. Vibrant in their wide and varied colours and patterns, impressive in the terrific range of horn shapes they display, amazing in their inimitable stature. Yes, the Nguni is indeed a creature of great beauty – small wonder it has inspired many an artwork, many a praise song and now … two wine ranges of exceptional quality.

What is the history of the remarkable Nguni? It was originally believed that the Nguni cattle arrived in Southern Africa with the Nguni-speaking people. However, more recent research indicates that the cattle were probably introduced much earlier by the Khoisan-speaking people. Exposure to severe climatic conditions and disease ensured that only the strongest survived, passing on their genes to what has become a robust and enduring breed.

Regarded as a status symbol by the Zulu tribes of old, the Nguni played an important cultural and economic role in their lives. The number of cattle owned determined the owner’s importance to a large degree, and the cattle were and still are used as a gift from a groom’s family to that of his bride (known as ‘lobola’). The Nguni has also left a rich legacy of metaphor in the Zulu language; thus it is said, Inkunzi ayahlaba ngokumisa which loosely translated means ‘one should not judge a bull by his horns’.

But it wasn’t only harsh climatic conditions and disease that the courageous Nguni had to overcome. In the late 1800s, in an attempt to establish ‘purer’ European blood into South African cattle, it became illegal to breed a cow with an Nguni bull. The breed became all but extinct until a government research committee was established in the 1940s.This led to the formation of government research herds and the Nguni Cattle Breeders’ Association. At last, in 1994 the Nguni was recognised as a breed.